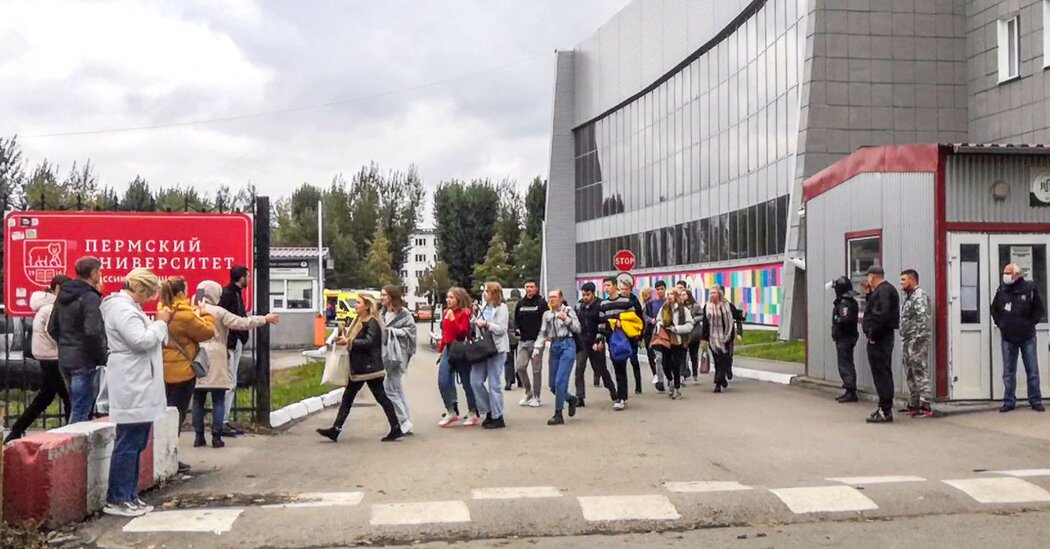 MOSCOW — An 18-year-old law student wielding a pump-action shotgun went on a shooting spree on a Russian university campus on Monday, killing at least six people and wounding 19, according to state media, government officials and a university spokeswoman.

RIA Novosti, a state news agency, posted videos showing a slender man dressed in black clothing, a black helmet and carrying a gun. He was identified as a student at Perm State University, where the shooting took place, about 650 miles east of Moscow.

The man had obtained the shotgun legally in May, the Investigative Committee law enforcement agency said, according to state media reports.

Once rare, school shootings have become more common in Russia in recent years. This was the second mass shooting at a Russian school this year. In May, an attacker killed seven students and two school employees in Kazan, another provincial Russian city.

News of the shooting came as a searing intrusion, with scenes of mayhem posted by media outlets, as election officials completed the count from a parliamentary vote over the weekend that had been marred by accusations of falsifications and repression of the opposition.

But there were no initial indications of a political motive in the shooting. The Kremlin said the gunman was likely disturbed, but declined to comment further.

University spokeswoman Natalia Pechishcheva initially said the attacker had been “liquidated,” but revised the account later and said he was in police custody.

The campus, which has about 13,000 students, was equipped with an alarm system to alert them to danger. But it was not immediately activated because the gunman shot a security guard near an entrance whose job it was to trigger the alert, RBK, a Russian newspaper, reported.

A member of parliament, Aleksandr Khinshtein, identified the gunman as an 18-year-old student in the university’s law faculty. RIA cited the Investigative Committee as saying eight people had died, but the Russian ministry of health put the death toll at six people.

The Russian government dispatched a plane from Moscow with emergency medical supplies and doctors. Health ministry officials and other senior officials flew to the region. President Vladimir V. Putin expressed his condolences.

In 2018 at a college in Kerch, a town in Russian-occupied Crimea, 21 people were killed and 50 were wounded in a shooting. Other less lethal incidents in schools and colleges followed, including attacks with air guns and an ax attack in Ulan-Ude, a city in Siberia, that wounded a teacher.

Russia has strict gun ownership laws. Applicants for a firearm’s license must pass psychological exams and own a smoothbore shotgun for a trial period before obtaining a rifle. Pistol ownership is more tightly controlled, largely limited to those, such as retiring military officers, who are given a pistol as an award for their service.

After the school shooting in May, President Vladimir V. Putin said he had ordered a further tightening of Russia’s laws on civilian gun ownership, raising the minimum age to buy a gun from 18 to 21. That rule has not yet taken effect.